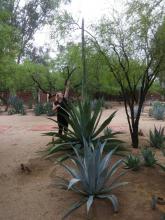 Long podcast interview with UA student news about climate and my career:

Interview with Sophie Yeo on Sexism and the IPCC https://psmag.com/environment/fixing-sexism-at-the-intergovernmental-panel-on-climate-change

Partly as a result of a fellowship with the OpEd Public voices project (which encourages women scholars to write for the media) I have written a number of recent op eds and columns for various media.  The one on teaching more optimistically generated the largest reaction so far.

Liverman, D., & Glasmeier, A. 2014. What are the economic consequences of climate change? The Atlantic. Retrieved from http://www.theatlantic.com/business/archive/2014/04/the-economic-case-for-acting-on-climate-change/360995/

Liverman, D. March 17 2014. The Wolves in Our Dogs: Are We Trying to Protect the Species Because They’re So Much Like Man’s Best Friend?Pacific Standard. Retrieved from http://www.psmag.com/navigation/nature-and-technology/wolves-dogs-76055/

Liverman, D., & Garfin, G. 2013. A hotspot for change: causes and consequences of global warming in the Southwest. The Washington Spectator.

Future Earth.  A couple of short videos where several of us talk about the challenges facing the new international science program called Future Earth for which I cochaired the transition team. I begin the first video and speak about 50 secs into the second.

Rio+20 Summit A speech on climate adaptation at Rio+20 http://puc-riodigital.com.puc-rio.br/Videoteca/PUC-Rio-20/Rio—20%3A-Forum-on-Science%2C-Technology-e-Innovation-for-Sustainable-Development-XI-12829.html#.U-5Y-kg6ZSs  I am at minute 19 or so.

Social science and sustainable development.  A talk I gave at the anniversary of the International Institute for Applied Systems Analysis in Vienna Austria in 2012 where I focus on the importance of evaluating our efforts (8mins)

Marfa dialogues This is an audio clip from the Marfa Dialogs on climate change in Sep 2012 where Texas state climatologist and I discuss climate change in the Southwest with an audience of artists. (audio, 20 mins)

ocial driving forces of environmental change.  This is  plenary talk (20mins) that I gave at the international Planet under Pressure conference in March 2012. I was asked to discuss the social context for the Anthropocene in the opening plenary. Will Steffen looked at the natural science issues. Here is a BBC article about my talk: http://www.bbc.co.uk/news/science-environment-17513660

Ecology, Ethics and Interdependence.  In this video from 2011 I have the privilege to conversation with His Holiness the Dalai Lama during a week long Mind and Life workshop in Dharamsala, India. Ten of us met with his holiness to discuss global change issues. I was asked to talk to him about the ideas of the Anthropocene, Planetary Boundaries and climate change (I am introduced about 30 mins into the 2 hour video)

ng social science This is a lecture (30 mins) that I gave at the Sackler – Climate Change Colloquium at US National Academy of Sciences in April 2011 where I try to explain some of the myths natural scientists have about social sciences on global change.  I also gave a longer version of this at the opening of the Amsterdam Global Change Institute in 2011. This video is in several segments (dml1, dml2, dml3, dml4)

Interview with me for the UK Open University project on climate change http://www.open2.net/creativeclimate/video_diana_liverman.html